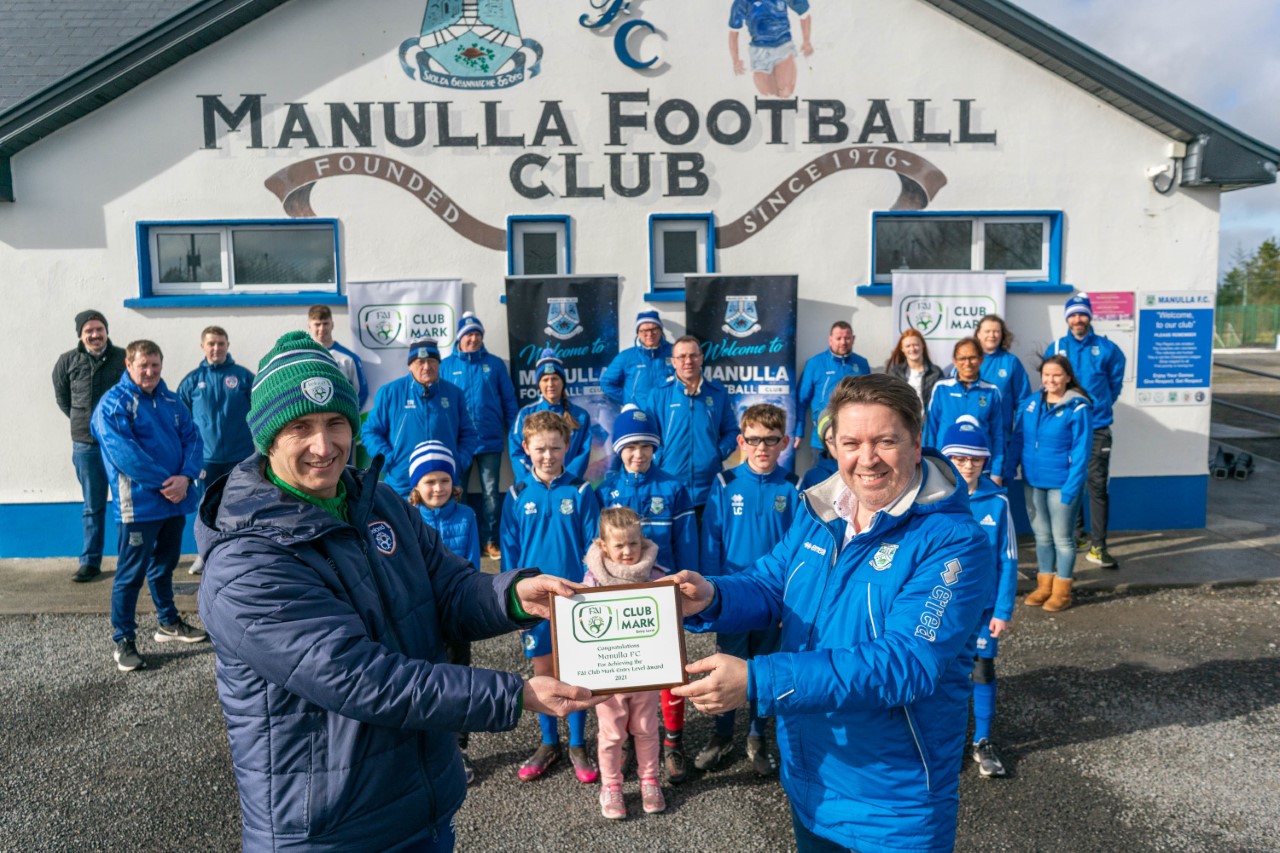 Manulla FC were presented with the FAI club Mark Award by Barry McGann of the FAI.

Manulla Football Club are delighted to accept this award as the Award is presented to clubs based on best practices in the governance, management, and adminstration of a Football club.

The aim of the mark is to, Establish minimum operating criteria for football clubs- Provide clubs with a road map to good governance, management and administration- Support clubs on their Journey- Reward clubs for achieving and maintaining high standards- Provide recognition to clubs for their commitment and achievements- Increase club’s capacity to operate effectively and grow football in communities throughout Ireland.

Football has grown into one of the most widely played and loved games in the country and this is due to the work undertaken by volunteers who play an invaluable role in recreational and competitive football at all levels.

The foundation of a club must be very strong and the FAI in awarding Manulla FC with the club ,Mark Award recognise that our club are following the correct road map and also recognise, and award our club management in all areas of gorernance, management, and adminstration.

Manulla FC was formed om May 3rd 1976 to promote, foster, and develop the game of assocation football in our small rural area in central Mayo.

Since its formation the club have achieved many accolades both on and off the field of play. Having started with a mens team in div 3 of the Mayo League it was only in their 5th season that Manulla captured the Div 1 title.

In 1992 Manulla FC purchased land and developed two playing pitches and a Clubhouse. No stopping there, 5 years later in 1997 Manulla FC opened the first all seated viewing stand, the first of its kind in the league. Outside the main pitch a fully lit walking track was developed to give all our community a safe place to exercise all year round.  A fantastic achievement for a small rural club.

Under age development became key to the success on the playing field and this paid dividends when our U 18 team in1995 took both league and cup titles.

Ladies football became very popular and having taken a similar road through under age development the ladies senior team conquered and won many league titles, Cups, and in 2016 they took home the WFAI Shield to be followed the following season 2017 with another All Ireland title WFAI Intermediate Cup.

Manulla FC is an inclusive club and 2019 saw the beginning of a new partenership with Mayo Autism Camp.  Two parents looking for a quiet and safe enviorment to run the first ever summer Camp for children with Autism. This is one of the biggest success stories and the Summer Camps have now developed into cycling lessons, dance, and drumming classes to mention but a few.

Just this year 2022 Manulla FC have purchased a further 3 acres of land adjacent to their facility to develop our facilities for the ever increasing numbers participating in our game.

The FAI Club Mark Award is recognition for a well organised club with strong structures and volunteers that are best placed to promote our game and develop players.

Clubs are the foundation of football activity and we must ensure that our foundation is strong and secure to continue on the success of our game and our club.

We thank all our volunteers since the club was formed who continue to look forward and plan to keep Manulla FC on the road map by making sure our club management in all aereas of governance,management and adminstration are onside.

The pictures attached show Barry McGann presenting Manulla FC with The Club Mark  Plaque . Also in the photos is Nigel Naughton FAI development office for Mayo who we are very thankful to for his help in achieving the Club Mark Award.